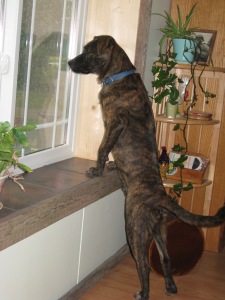 1:30 am.  It was a warm night , in the 60’s after an 80 degree day. Nothing in particular woke me up, which was strange because it’s usually one of our two dogs throughout the night.  So, since I was already up, I opened up the front door and they tore outside.  Foxy, our older more timid girl came back within 10 minutes and wanted back in.  Brodie, who is just over a year old and fearless, had started barking and didn’t let up.  It didn’t seem like a very urgent bark like “Oh my gosh, I’ve discovered something”, but more like a “I hear the coyotes again” bark.  I was curious, because I had been setting a trap in the west lawn, next to the pasture and beside the dog dish, specifically for catching the skunks and raccoons that regularly visit and eat the dog food, cat food, the fresh eggs in the chicken house, and occasionally my chickens or their chicks.  So I grabbed my flashlight and decided to check out what all the barking was about.  I figured I’d just walk out by the trap in my PJs and check it out and come back.  But when I went out that way, Brodie was running up to me, heading back to the west, running back to me, then heading over past the trees on the west again.  As I got closer, I could see that he was jumping up repeatedly on a specific tree.  Great……. It was the same raccoon tree from two years ago.  Back then I had been checking the west lawn for cracked eggs, as something had been taking them to the wood pile over there, eating them, and leaving the shells scattered all over the place.  I had walked past that tree and heard something INSIDE the tree!  If that wasn’t ever spooky and creepy!  Noise was coming from inside!  This tree is very large and very old, and one of the large branches had split off about 7′ from the ground, creating a vertical cave about 4′ deep.  I was hearing weird rustling and scratching noises from inside the tree.  I had rushed into the house, grabbed a camera and took a photo down in there with the flash and found that there were eyes glowing back.  With help from my husband, who climbed up and shot down into the cavern while I held the flashlight, there ended up being 5 or 6 coons that were shot,  the same culprints who had been eating all the chicken eggs.

Now Brodie was jumping up on that same tree, in the same area as the branch with the cavern.  “No, it couldn’t be, not again!,” I thought.  My flashlight did not yield any eyes in the black of the night.  He didn’t give up his barking, though.  I thought briefly that maybe it was the owls who had come back, so I panned my flashlight beam high up into the branches.  No owls, but three pairs of glowing eyes stared back at me.  More coons after my chickens and their eggs!  They were up really high, and they were on the move, climbing even higher yet.

I raced to the house to retrieve my trusty 410 shotgun, then raced back and tried to figure out how I was going to shoot, hold the flashlight and actually see them all at the same time because it was  almost straight up.  The gun jammed and I couldn’t open the chamber to check if I even had any shells left in it after the last skunk fiasco.  Damn it! It was stuck!  So then I raced back to the house for husband reinforcement.  I shined the flashlight right in his face and started yelling, which worked to jet him out of bed quickly.  I waited impatiently while he got dressed and went to get his .22.  I grabbed some 410 cartridges just in case, and rushed back out to make sure Brodie was still keeping them in the tree because he had quit barking incessantly. No problem there, they were still really high up there, with their glowing eyes reflecting in my flashlight.  Bob got there and tried shooting with his .22, but it kept hitting the large branch they were on.  It was so large, that it almost blocked them from sight and it was an almost straight up shot.  I gave him the 410 to try and he quickly figured out how to get it unstuck and loaded it with cartridges.  This gun proved to be the ticket, with three successive raccoons falling from the sky one by one and landing in the pasture with a thud.  One huge one and two juveniles.  This time of year they are preparing for fall and winter and eating hoards of food.  We checked the rest of the tree and we were pretty certain that this was all there was to this gang.

I wondered what this gang had been up to.  I had been missing eggs lately, and a few weeks ago 8 of my young spring chickens that I had raised since they were chicks in March, I had found missing and killed and left laying in the pasture and corrals.  These young chicks I had babied, separating them from the rest of the flock by putting them in the chick tractor only after they became too big for the boxes with the cheesecloth tops that I had placed in our guest room to keep them warm.  They were sweet, healthy babies that I had counted on to be egg layers to make up for some of my older hens who don’t lay much anymore.  All my chickens are guaranteed a long, happy life, as I keep them all till they die a natural death, even though they might not produce anymore. These babies I needed to grow up to be happy, healthy layers.

But I’m not sure these three gang members would have been capable of that slaughter, hauling 5 whole chickens off and leaving 3 behind, but I don’t know for sure.  More likely it was coyotes, or maybe even something bigger traveling through like a mountain lion or a bear.  There have been enough of those sighted around here lately…….  All I know is that the following night after the slaughter happened, I spent the whole night outside in the pump house with the .22, the 410, my husbands night vision binoculars and a blanket.  I was positive that whatever it was would show up again.  I had spread the 3 chicken carcasses around separately, and was sure that something would be coming for them again.  I’d be able to see them with the binoculars.  But alas, nothing happened.  Nothing except the meteor showers, which I had a grand view of!

I started setting out two traps with eggs in them every night, and I did catch a skunk who I suspected had killed 4 ducklings and devoured the rest of the mama ducks eggs, but it could have also been this gang of coons.  Because all the rest of the eggs that she was sitting on, just waiting for them to hatch, had been taken, as in carried away somewhere.  There was not a piece of shell left, yet they left the little ducklings just laying there. Yep, more than likely it was these coons.  Skunks can’t carry them like that, they eat them at the site and leave the hollow egg there.

Now don’t get me wrong, I love animals.  I even like raccoons.  We had one as a pet growing up, and he was adorable when he was little.  He had a funny personality and his feet were so fun to play with, all soft and with lots of busy fingers.  He loved to wash his food in the water dish before he’d eat it, and loved to make a mess with the water.  We had alot of fun with him in the house until he got older and became really mean and would bite.  That’s when we set him free.  So, I DO know more than your average Joe about them, and I DO like them.  I just can’t tolerate ANYTHING that comes and kills my chickens after I have put so much time, effort and expense into them.  They were just perched for the night, sleeping and happy, and they got taken and eaten.  Yep!  Whatever decides to do that to my babies is going down, no matter what it is.  I realize they have to eat too, but they can go eat pheasants and their young or something else, heaven knows we have tons of them up here on the bench.  They don’t call it the pheasant capital of the world for nothing.

Every year, at about this time of year, I have pretty much a steady stream of critters looking to fatten themselves up before hibernation for the winter sets in.  And those critters decide that cat food, dog food, chickens and chicken eggs are going to be their steady diet.  And every year I pick off numerous skunks, raccoons and even one time a badger who took up residence INSIDE the chicken house.  And they still keep coming!  There is no end in sight!  My husband has finally given in and ordered me a trail camera.  At least I will be able to view who all the night visitors might be.  I was considering getting a baby cam too, just so I can see/hear what’s going on inside the chicken house.  So much for getting a decent nights sleep, though……..